In January, I was fortunate enough to be able to move from DSL to FiOS at home and the extra bandwidth sure has been nice. Unfortunately, I just received word from my ISP, DSL Extreme, that the lovely Verizon has changed their mind and will not be allowing their circuits to be used by third parties. As a result, DSL Extreme, will no longer be able to resell FiOS. Worse than that is the fact they will have to discontinue the service for their customers by March of next year. While they promise to make it as seamless as possible, the problem is I don’t want to be a customer of Verizon.

I don’t have anything against them, personally. You see, their terms of service is the problem. I like the flexibility and control of hosting my own domain and host it on a computer in my living room over the home’s Internet connection. Any typical consumer provider doesn’t allow you to host servers and want to require you to pay more for a commercial account (if they even offer one). DSL Extreme had very reasonable terms of service and generally allow their customers to do whatever they want as long as you don’t make trouble for them (e.g., hosting a spamming service).

So, between now and March, I need to decide if I should go back to plain ol’ DSL or switch to Verizon and move my services off my home server onto a hosted one somewhere. Fortunately, Verizon left the copper pair for our phone when they pulled the fibre so switching back to DSL is an option that shouldn’t normally be possible. I’m not looking forward dropping the bandwidth to a third of what I’ve gotten accustomed to, but I’m also not liking the idea of moving my services to someplace else.

Thanks, Verizon, for causing me this trouble. Please reconsider your decision as there are others that are being inconvenienced by it.

This is my first post from my new iPad. It’s been interesting getting used to the new form factor of the device. Since it’s based on OS X Touch (the same that is used by the iPhone and iPod Touch) it is immediately familiar and the initial application base is quite good even when you exclude iPhone apps that haven’t been updated.

I’ll have to spend some time getting adjusted to the interface but I’m really looking forward to how this platform develops. I really think Apple has another hit on their hands.

This Saturday, Apple will be releasing the ‘magical’ iPad to the world. I’ll be getting one, but you already knew that, didn’t you? I’ve been a user and fan of the iPhone since its release in 2007 and it has been a device I use extensively every day. Many act like a “large iPhone” is bad thing, but I’m really looking forward to using a device that has the functionality of the iPhone without the limited screen size of a phone.

Does it equal a laptop, no. That’s not the point. The iPad shouldn’t replace all the functions of a laptop. Yes, the iPad is made by Apple, and while it technically running OS X, it is the same variant that has been found on the iPhone for years. A desktop OS is the wrong metaphor for a tablet with finger input. As with any platform, quality applications (or lack of them), will ultimately determine the fate, but by judging the buzz and the early reviews, I think Apple has changed the game again.

Time will tell. Speaking of time, I only have about 36 hours to wait.

A lot can change in ten years. Since it seems to be such the in thing, here’s my assessment of what difference ten years can make.

I saw a review of Waze in a blog post by The Unofficial Apple Weblog and while they were a bit cool on it as a navigation app, it is free and has an interesting take. I picked up a Kingston windshield mount which replaced where I had my GPS so am in the market for a GPS app for my iPhone. The reality is, however, that in spite of my frequent time in my car, it’s really just to and from work (all 500+ miles per week). Obviously, I know how to get to work so I can’t justify a significant expense. Since Waze is free, it was a clear choice to give a spin.

The program uses a map that is fed over the phone’s data connection and is community driven. Anytime you drive on a road that hasn’t been traversed before, you “munch” dots much like Pac Man which verifies the geometry and your speed and is uploaded to their servers which is then fed back to others as traffic information for routing alternatives. You can also point out specific traffic problems, speed traps, or even just “chit chat” which can be viewed by other users. As you munch roads, provide updates, or just confirm traffic, you get points and your points determine your ranking. I never thought that driving around would count for anything.

The website allows you to view your routes or edit the dynamic map (presented much like Google’s) to add new roads and update other aspects (house numbers, name, road connections, etc.).

The downside, is that currently the maps have some trouble with accuracy but that presumably will improve as more users use it and especially if they update it from the website. The navigation app is a little rough as well with its presentation but that’ll hopefully improve as well.

It’s a decent little app and a creative service. Back to road munching. I wonder how many points are needed for an extra life?

I know this is the Occasional Blog, but posts have been too far in between (the Twitter posts don’t count). Please forgive me. I’m not dead, just busy. For the sake of an update here are some highlights of the last several weeks.

I’ll do my best to do an actual post soon, but until I can find a candidate, things will still be busy.

If you follow me on Twitter or read my previous Twitter posts, you saw that yesterday we decided that we could afford to buy a Dell Mini 9 for my birthday. I’m kinda excited as I’ve been wanting a netbook for a bit and the Dell is able to run OS X with no significant compromises (aka Hacintosh). Since I think it will be a bit before Apple decides to play in the netbook arena (if ever) and, if they do, will not be likely targeting sub-$400, this will be the best way to get a mini Mac laptop on the cheap.

Of course, the challenge of getting OS X running will be fun in-and-of-itself. Will it be the perfect laptop? No. I know the screen is small, keyboard cramped, and the processor is on the modest side, but I will be able to carry it almost anywhere and will have a full browser, mail, and programs with me. With the SSD disk, it should be silent, too, which is nice.

I’ll be ordering it tomorrow morning and while it won’t make it in time for my 40th birthday on Wednesday, it will hopefully be in before too long. I’ll let you know how it goes and what the experience is like.

As I mentioned in a previous post, a few colleagues at work have several of the ever more popular netbooks. One of the guys has been opting to use his personal one and leaving his work one sitting largely idle. He was kind enough to let me take his Acer Aspire One for a spin. At the same time, I’ve been taking a look at the recently released Windows 7 beta. This post is a mini review of both.

First, the Apire One is certainly a cute system but it’s not without its faults. The screen is 8.9″ and 1024×600. It’s enough to get work done, but you don’t realize how spoiled you get with screen real estate until you don’t have it. The one I’m borrowing has a 6 cell battery (rather than the standard 3 cell) which gives it about 4-5 hours of use which is quite nice. For the Acer itself, I really dislike the fact the trackpad buttons are on the left and right rather than below which makes it awkward to use. Also, due to the smaller form-factor, my palms hang off the side which causes the case edge to dig into them. Of course, if I wasn’t quite so lazy it wouldn’t be a problem.

I’m watching the upcoming 10″ Aspire which has a normal trackpad but with all the other features. I’ll be keeping my eye on it and may look to get one for myself. As solid-state disk (SSD) gets cheaper, the idea of a 64-128G flash drive instead of 2.5″ disk is attractive as the drive on the Apsire is just noisy enough to be noticeable (though not bothersome).

If you know me or have read this site, you know that I’m a Mac guy. I’ve used Macs since 1986 and while I have access to just about any type of system in use, if I’m trying to get something done, I use a Mac.

I do use Windows every day and have since Windows 3.1. Microsoft has done some good things and some bad things. I’ve been using Windows Vista for a bit now and have been underwhelmed but I do think it isn’t quite as bad as the general public perception. Windows 7 was released as a public beta a few weeks ago and I first created a VM on my MacBook and most recently installed it on the Acer. I can honestly say, for Windows, it is a nice operating system. Netbooks are, by design, lower end systems. As operating systems evolve, they generally require more and more resources. Vista’s requirements have been a source of complaint and at least one lawsuit. Windows 7, as I’ve seen, is far more efficient and runs quite nicely on the little bugger. It’s taken some effort to find proper drivers for things like wireless, touchpad, and video, but even stock, the system was usable.

Having a system you can simply cary around makes keeping a computer handy easy. Of course, I personally hope that Apple jumps into the game, but I’m not holding my breath.

I picked up a Xtand by Just Mobile to use with my iPhone at work. I previously was using a modified Coke can made by a friend of mine but that wouldn’t allow me to stand the phone vertically while using the audio cable (which comes out the bottom).

This new stand is quite nice. Not only does it match the general Apple aesthetic, it swivels to allow the phone to be displayed both portrait and landscape. Now, I can use my phone as a little digital picture frame while I work.

The other plusses are the fact the rubber corners can be removed to allow my phone to sit nicely while still in its silicon case and the best (and unexpected) of all is the fact it resolve the GSM noise problem I have been trying to eliminate for months.

Since I am done with travels for a bit, I am now all set for spending far too much time at my desk. I guess that’s good?

From xkcd. This is cute, but I fear it might be more true than I’m willing to admit. 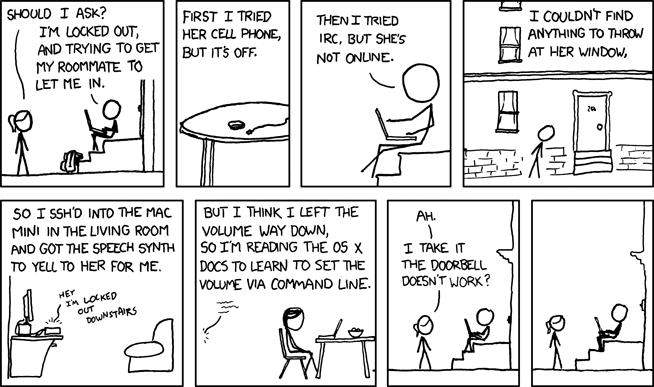