Back in my early Sony days when I worked at RedZone Interactive, a friend and I got into RC planes. Since the rest of the studio didn’t generally roll in until about 9:00 or 10:00, we had the opportunity to take our planes out in the lot behind the office in the mornings while the winds were quite gentle. It’s a fond memory. 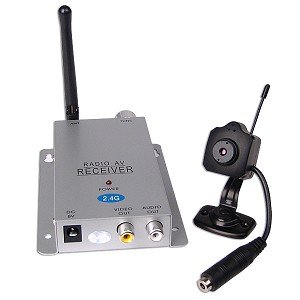 About the same time, I saw online a wireless video camera that was about the size of a matchbook and immediately thought of attaching it to the plane to get a cool POV video while flying.Â I should note that this was 2004. GoPro didn’t exist yet let alone theÂ whole ‘sports camera’ category. Neither did drones that are so common nowadays.Â Am I a trend setter? Not really. I just thought it was a fun idea.

Not surprisingly, it was very jerry-rigged. The camera with built-in transmitter was mounted on a stick protruding from the side of the canopy attached to a 9v battery for power. The receiver was on the ground attached to a video camera recording the results. My friend had to spend the entire flight watching the small screen on the camera while constantly adjusting a tuning knob on the receiver to keep the signal usable. The results are pretty poor by today’s standards, but I think it turned out pretty good, all things considered:

Fun times. I still have the plane, though I haven’t used it in years. I just may have to pull it out and see if it still works. I probably won’t bother with the camera.